Here is post about cloth shoulder titles for the Third/Fourth Cavalry Regiment of the Australian Army.  It is clear that metal shoulder titles for this Unit, read ‘3/4Cav’ (correctly pronounced ‘three, four Cav’). Nonetheless, the habit these days, when writing the Unit’s name… is to use the abbreviation employed by the metal title. So, whether using the verbal or the (differing) written form of nomenclature, it is likely that everyone with an interest in or knowledge of Australian Army formations, will correctly understand the Unit being discussed.

Having made that point, the following images show 4 ‘variants’ of the cloth shoulder title attributed for use by this Unit. Note that cloth shoulder titles were deleted from use by the ADF by 1996 (although it is acknowledged that ADFA personnel do continue to use a cloth ‘rocker’ of navy blue background with red lettering and ‘merrowed’ edge, upon some forms of dress, including a black brassard worn as ordered, on the ‘Polly’ uniform).  N.B. There is no suggestion that other variants of cloth tiles for Third/Forth Cav are not in existence.  However, the purpose of this post is to indicate that trustworthy provenance is (currently) to hand, for only the bottom 2 insignia items shown in the posted images.

On the other hand, the upper-most rocker is clearly a poor grade reproduction (or perhaps a fairly obvious ‘gap filler’ intended for collectors).  Clearly, that item makes no attempt to conform to the correct/approved design dimensions for cloth shoulder titles (something which the grid-paper background image makes clear, when compared to the lower 3 insignia specimens). Furthermore, the letters ‘rd’ in that example, are clearly misaligned when compared to the correct (radial) alignment for all of the remaining lettering.  Meanwhile, the ‘body’ material for this specimen, has a loose and soft texture, unlike approved (‘winter issue’) materials… which exhibit a felt body/nap and surface. The colour of the upper-most specimen is also the lightest and brightest of all 4 items shown here. 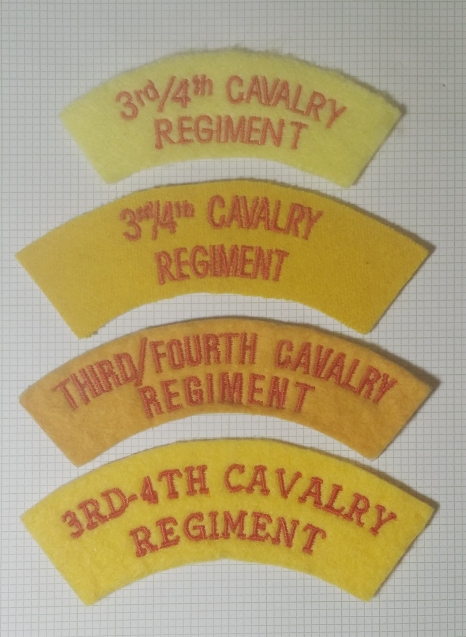 Meanwhile, the second item from the top, does conform to design dimension specifications, as do the lower two items (while each of those do have some reliable level of provenance of their own) However, the second ‘rocker’ from the top has no apparent provenance and the greater purpose of this post, is to raise the question about provenance for that item (and indeed all other variants), among period service personnel from the Unit and among militaria collectors, dealers and historians, who may well have production and/or issue provenance information to hand (whether pro or con), about these 4 insignia specimens and specifically, on the apparently ‘orphaned’ second variant shown above.

Yours in collecting and scribbling about it