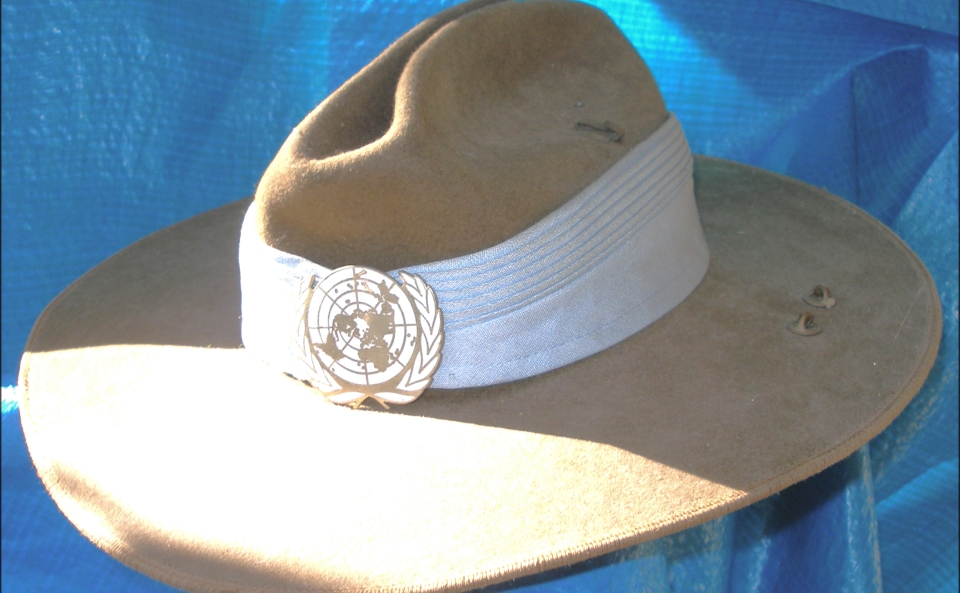 Volume 1 of our pictorial reference work on metal insignia worn by the Australian Army (in the post 1953, or ‘QEII’ era), covers insignia items for: Corps, Schools and for various UN Deployments. Those of you who are familiar with the content of Volume 1, will be aware that the work also extends to cover Philanthropic Organisations which are authorised to wear their insignia on relevant ADF uniforms (including the Red Cross, the Salvos and the Everymans’ Welfare Service).

The purpose of this post, is to cover new material on UN Deployment insignia, as a suppliment to the existing material within the hard copy and the pdf versions of Volume 1. Both hard copy and downloadable versions of that work, set out images of (metal) ‘Other ‘Ranks’ badges for wear on the UN’s ‘Beret Blu’ and on other forms of uniform headdress… including the ADF’s Khaki Fur Felt ( the ‘KFF’, or ‘slouch hat’).

ADF Personnel & the UN Deployment to the Western Sahara (MINURSO).

Volume 1 of our work, also includes images of a deployment-specific badge adopted by ADF personnel who served as part of the UN Deployment to the Western Sahara (MINURSO). The badge design appears to be an echo of, or perhaps a reference to, insignia used by a Legion Deployment to the Sahara at that time.

The following information on details for Operation Cedella, can be found at the Australian Peacekeepers & Peacemakers Association web site:

Strength: Total of 219 personnel consisting of 5 contingents of 45.

(The ADF’s continuing  contribution to the UN Mission in Korea)

We are now in a position to look at a series of additional insignia images.  In this instance, we will examine insignia worn by a total of approximately 68 ADF personnel who have formed part of Australia’s direct involvement in the work of the United Nations Command, Military Armistice Commission (UNCMAC).

The following images show a 1980’s period ADF uniform, manufactured in the (discontinued) ‘safari suit’ design. The uniform shows an Australian Commonwealth Clothing Factory (ACCF) manufacturing tag (dated 1983), along with UN Deployment cloth epaulet (slip-on) insignia. The images also show a European style (brass and ceramic enamel) fob, with details for the Joint Security Area (‘JSA 344’), as worn by UN Mission personnel, who are responsible for monitoring the Korean Peninsula’s Demilitarised Zone (i.e. the ‘buffer area’ created as the result of the armistice in 1953).

The UN’s JSA 433 fob is worn fastened to the button of the wearer’s right pocket, beneath the pocket flap.

The the Joint Security Area (JSA) communications and conference complex, is located in the Korean village of Panmunjom.  There, (unarmed) military personnel on both sides, come face-to-face as part of daily armistice duties.  Details of various security incidents (and deaths) which have occurred in the Korean DMZ and in the Joint Security Area in particular, can be found using some of the web reference material set out below.

Details of the UNCMAC Mission can be found in a number of web locations, however some of the most comprehensive material on ADF deployments to UN Peace Keeping missions, can be found at the Australian War Memorial (AWM) web site:

The AWM’s material, chronologically catalogues the ADF’s participation in UN Deployments since the close of World War II. Importantly, the AWM information includes a list of casualties.

A further detailed (and highly recommended) resource on ADF’s UN deployments, is maintained by the Australian Peacekeeper & Peacemaker Veterans Association at:

The Association’s web site provides the following detail on the UNCMAC’s armistice monitoring work on the Korean peninsula.

Purpose: UNCMAC was established in July 1953 at the end of the Korean War to supervise the Korean Armistice Agreement, and which has been operating ever since. UNCMAC’s observation role is limited to the monitoring of the armistice, the investigation of serious incidents and participation in relevant negotiations. UNCMAC does not permanently deploy observers along the ceasefire line

Information on the Joint Security Area (JSA) of the Korean Demilitarised Zone, can also be found in various online resources. As a fan of world community knowledge sharing, the Wikipedia treatment of this topic is also highly recommended. The link and a very brief extract from the Wiki information, is shown below.

The Joint Security Area (JSA) is the only portion of the Korean Demilitarized Zone (DMZ) where North and South Korean forces stand face-to-face. It is often called the Truce Village of Panmunjom (the Truce Village; or simply, Panmunjom) in the media and various military accounts.

We trust that this information will be of interest to ADF families, to Veterans, collectors and to historians alike.

Yours in research and collecting