Further to a recent post on RAA beret badges, this article shows a series of Artillery beret badges, positioned below a couple of RAA hat badges, which are present in the first image, for the purposes of scale only.

As you will see from the above image… different Australian Army OR’s beret badges, are positioned on either side of a current period British Army issue item (the one with the ‘slider’ fitting of course). As you will see, just below those Queen’s Crown (i.e. post-1953) beret badge items, there is an Australian made ‘King’s Crown’ beret badge from the 1948 to 1952 period. 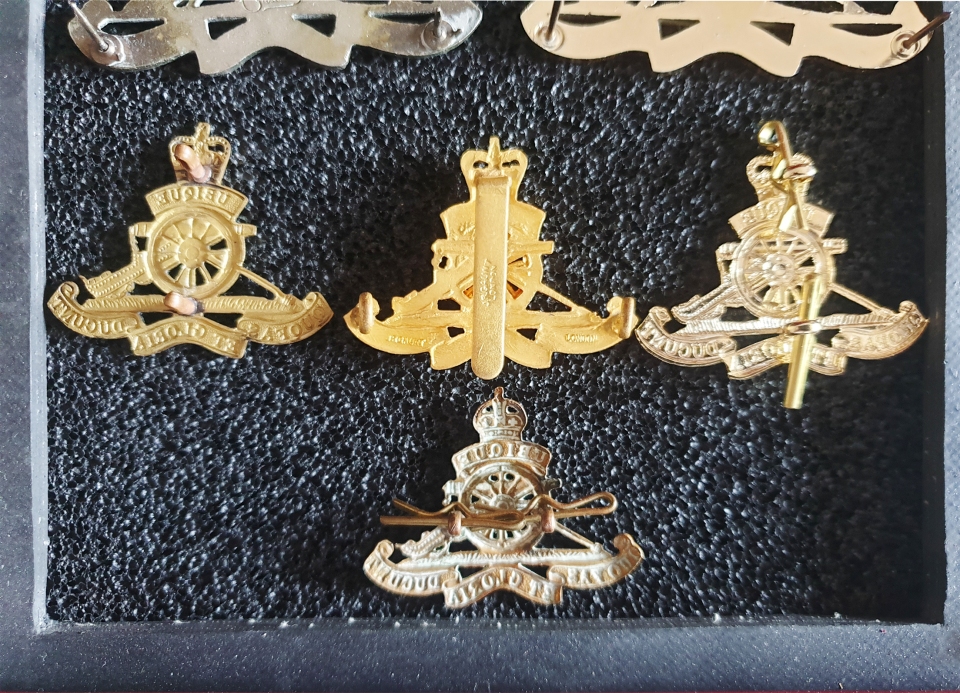 Our first image and (more importantly) the comparison image of the verso face of those insignia… are intended to provide visual information which differentiates Australian (RAA) items from British made (RA) ones. As will be seen from the detail shots, the British Army version in the middle of the frame, sports a ‘slider’ fixture and is maker’s marked (to “J R GAUNT LONDON”) on both the badge body and also on the slider fixure.  It is well to note, that each of the Australian made beret insignia, feature:

In due course, it may be worth canvasing the fact that various British Army insignia have been wholly ‘adopted’ by Australian Army personnel over the years. Of course, that point is something which blurs the distinction between what was ‘issued and what was ‘worn’, in terms of what needs to be included in our planned future works on Australian Army insignia from federation, through to 1952 (from where our existing hard copy books take up the story of Australian Army Corps and Regimental insignia).

So, on the question of RAA beret badges Vs RA headdress items, it will be interesting to “…watch the fall of shot”.

Yours in research, in collecting and in scribbling about it,