In a post during March this year, we shared images depicting 3 trial variations and one approved issue version of the RAAF SF beret badge, for qualified Joint Terminal Attack Controllers.

Note also that this SF insignia was conditionally included in Volume 2 of our work on Metal Uniform Embellishments of the Australian Army (at item CB 360R), for the purposes of documenting and explaining the issue of this SF item and its recent appearance on the headdress used by B Flight (Combat Control Team) Operators serving alongside Australian Army personnel. 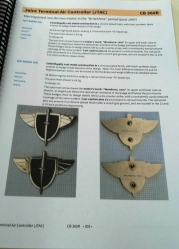 We can now update our earlier post, with this image of a beret and JTAC badge (with black SF backing patch), which forms oart of AWM’s SF deployment collection in Canberra. The beret and its insignia are displayed, with the medals of a member of No.4 Sqn B Flight and sundry service-related items on display.

The photo was taken during a visit to Canberra during February 2018. Arthur Butler, Bavid Butler and I visited the AWM, to arrange for the AWM GiftShop to carry stocks of Vols 1 and 2 for sale to members of the public when they visit the Canberra War Memeorial. During the visit, we also provided copies of Vol 1 for distribution to all 18 Museums in the Australian Army’s museum network, which is administered by the Australian Army History Unit.

As stated in our earlier post, to understand Combat Control Team insignia, it is important to note that RAAF No. 4 Squadron A Flight, is composed of aircrew responsible for operating the aircraft used to train ADF Joint Terminal Attack Controllers (JTAC).

B Flight (Combat Control Team) personnel operate with Australian Army Ground Forces, to direct and control combat airstrike (CAS) operations for the forces they operate with.

Yours in militaria collecting and research